Who are Australia’s most valuable employees? from Jon Windust

I love thinking about the future of work. And recently there’s been a lot of discussion that the future of work means bigger companies employing less people. It’s hard to draw any other conclusion when you look at deals like the Facebook acquisition of WhatsApp, a US$19 billion dollar acquisition with just 55 employees. I’ll save you pulling out the calculator – Facebook are paying an incredible $350m or so per employee!

I wanted to understand the Australian perspective on whether we’re seeing the start of a major disconnect between employees and firm value. To do this we’ve spent some time running the numbers on the ASX 100. And the results might surprise you!

The average Australian employee is worth just over $1m

I’m just looking at the ASX 100 here. But that’s a pretty good representative sample, given that these 100 largest companies in Australia employ between them about 1.4m people.
At an aggregate level, these 100 companies are worth just over 1.4 trillion dollars (yes, with a T!). So at an individual level, that means that the market values each Australian employee at just over $1m ($1,002,617 to be exact). 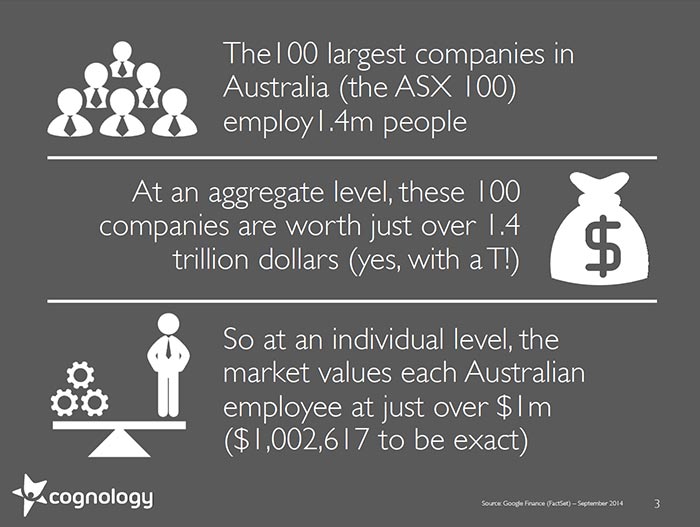 Before you go asking your boss for a pay rise, it’s worth considering that this average masks some big differences. So of course I put together a top 10. And my vox-pop around the office shows that pretty much no one can guess which large Australian company has the most valuable employees. 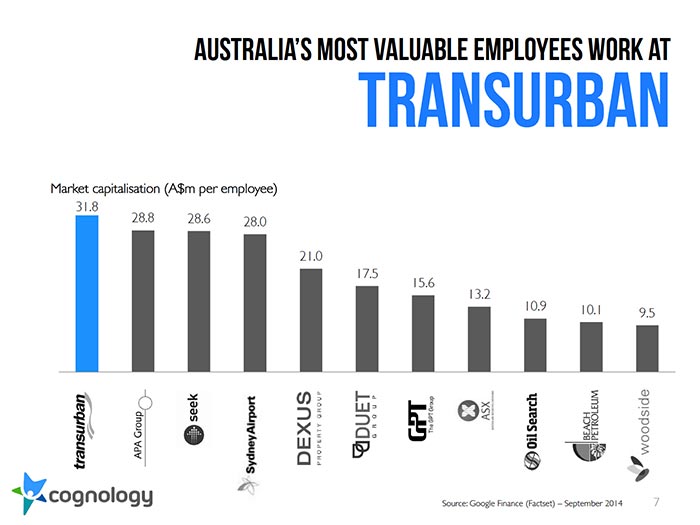 A single employee at Transurban is worth nearly A$32 million dollars. The startling fact here is that depending on which day you look at the exchange rate, that’s more per employee than Facebook! (Their average employee value is a measly US$28 million). It’s also significantly more than Apple, Google, Amazon and Microsoft.

Surprisingly, Seek is the only technology company to make the top 10. In Australia, it’s not technology, but tollways that win out in this list.

The big earners in the US work in the cloud. Here in Australia the big money is still in the ground.

On a sector-by-sector basis, it’s not surprising that the most valuable employees sit in property and infrastructure. Long term monopoly contracts and regulation mean that there’s simply less employees required to generate earnings. But what’s startling is just how significant the difference is between industries, with property and infrastructure employees worth nearly 3x more than the next most valuable sector.

The difference between Australia’s most valuable and least valuable employees is HUGE! 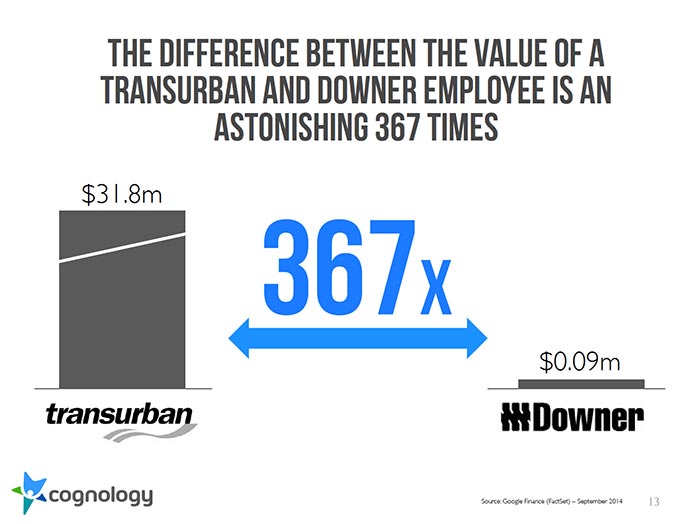 As well as this astoundingly large multiple, what’s interesting here is that the bottom 10 companies in this list are all subject to market and technological disruption. We’ve got a collection of steel makers (Bluescope and Arrium), retailers (JBHifi and Myer), logistics companies (Qantas and Toll) and engineering firms (ALS, Leighton, Worley and Downer). 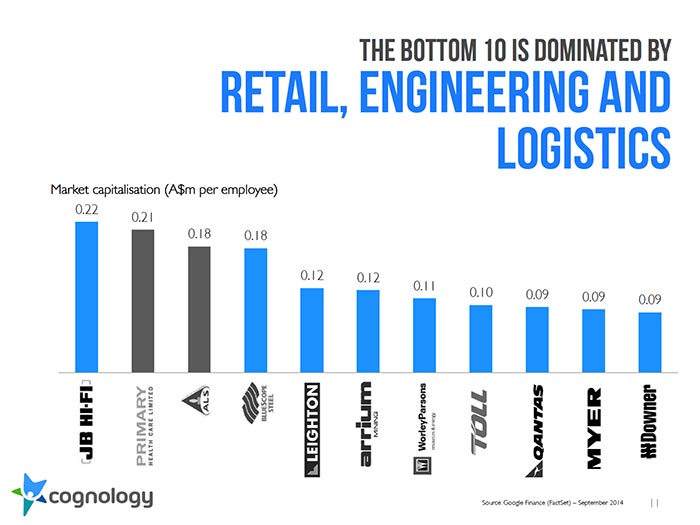 What does this all mean?

There’s a large number of conclusions that you can draw out of this data. And I’m sure others will have insights to share in the comments. But let me start with a couple:

I’m also looking forward to tracking these stats over time to see if the average Australian employee is getting more or less valuable. We’ll update this on a semi-regular basis to keep track.

There’s so many other insights to be had here, so make sure you stay tuned to the Cognology blog over coming weeks as we look in more depth at key industries and companies. But I’d also love to hear from you. What does this data tell you about the Australian workforce and the future of work?

These numbers are based on Google Finance data as at late September 2014. This was supplemented with WGEA data where necessary (some companies are quite tricky about hiding how many employees they have).

Why is Australia ignoring talent management and recruitment risks?

Use performance management to give your employees purpose, and watch what happens next

Are Millennials really changing the way we work?

Do you say “you can only manage what you measure”?  (and then do the opposite...

We asked seven workplace experts for their number one tip in dealing with an...
Scroll to top