“What is the most important thing you have learned about leadership?”

Leadership is a skill, the mastery of which takes many years. Don’t assume you’ve learned it. This is particularly true for “natural born leaders” who are most susceptible to thinking they have it covered.

When people say someone showed great leadership they usually mean one or all of:

It is true that some people will naturally exhibit the first two points above. Some will even perform some of what is needed for the third point by force of their personality. But, I am yet to meet someone who possesses all of the skills out of the box to get people to cooperate to achieve something substantial. Some people get a head start because of their competence, courage or social skills. But it takes time for anyone to learn how to lead well.

I’ve previously written about some of the most important aspects of leadership. As a person progresses over their career from team lead to senior leader, new skills and levels of capability are required. Read leadership theory, certainly, but seek out those who have done it successfully and learn from them.

One of the most effective learning experiences I have had is regular formal catch-ups with other CEOs where the more experienced help the less experienced understand how to handle specific situations. In these discussions there are normally a number of options put forward by the different CEOs. From this, the person learning is able to choose their path. But once the path is chosen, the learning hasn’t really taken place until it’s put into action. Once done, positive or negative reinforcement will tell the CEO whether to take the same action next time or try an alternative route. Much of leadership is learnt this way. Theory provides a foundation. Natural ability provides a partial foundation. But true learning takes time and a myriad of experiences.

Zhang Ruimin took the helm of a struggling refrigerator manufacturer in 1984 when he was just 25. As a leader he won the confidence and goodwill of his workers and reversed the company’s dismal quality record. Since then, Zhang has turned the Haier Group into the world’s fastest growing appliance maker with the largest market share in white goods world wide. 1

“A leader whose existence is unknown to his subordinates is really the most brilliant one.”
(Ruimin, Zhang)2

Prior to 2005, Haier’s 80,000 or so employees worked in traditional functions like manufacturing, sales and marketing. However with the advent of the internet, Zhang knew that the existing departmental/functional/silo organisation would be too slow to respond to customer needs into the future. So he began reorganising the way employees worked. 3

Zhang believed that if the company wanted to intimately understand and meet consumer needs, staff needed to be directly connected with the customer. Instead of complying with rules and following a manager, he decided that workers should have the freedom to make decisions led by the users of the things they make – the consumer. 2

No, I’m not cursing in code.

These microenterprises operate as independent ventures. Each is responsible for its own hiring, procurement, strategy, production and ultimately profit and loss.

The ZZJYT’s are not permanently assigned to a particular product or role. Instead they are formed through internal competition. If an employee identifies an opportunity for a new product or service, they are free to propose their idea. A vote involving employees, customers and suppliers determines whether the project goes ahead. The winner becomes the project leader.

Once a leader is appointed they can independently handpick a team and find their own manufacturers and distributors (either internally or externally) to produce and sell their product. 3

The project leader must work hard to stay ahead of the catfish. That is what the firm calls the person with a rival idea with the second highest number of votes. 3 Once a leader is in place, his or her team appraises the leader’s performance every quarter and votes whether they want to keep them in the position or replace them. 4

Zhang believes this structure creates competition in the organisation while also fuelling entrepreneurship. 3

Zhang believes that employees in traditional organisations tend to focus too much on what their bosses say or think because their pay is determined by them. This is why there is no position-related remuneration at Haier. 5 Instead employees are paid solely based on performance and the results their team achieves.

In the new generation Haier, talent is provided through an open labour market. Each ZZJYT is given the freedom to innovate by reaching out to customers, prospective employees, collaborators and even competitors.

Employees are free to leave or join ZZJYT’s, however a unit will dissolve after the project is over and talent goes back to the marketplace.

Whilst many businesses will find this concept foreign and unmanageable, for industries like Hollywood, bringing skilled workers together for the length of a project is nothing new. (See https://www.cognology.com.au/are-terms-like-hollywood-and-gig-spelling-the-end-for-the-traditional-employment-model)

Instead of offering jobs, Zhang says Haier offers everyone a continuing series of opportunities to find jobs via an entrepreneurial platform.4

According to Zhang, eventually there won’t be employees at all. There will only be a platform. 1 (I feel like Keanu Reeves might pop up any second now….)

A natural evolution in the internet age

Zhang Ruimin has been lauded for his accomplishments in management innovation, and yet by some he is still seen as a radical. Haier’s goal of becoming a facilitative platform without traditional employees seems consistent with broader global trends towards open collaboration, greater connectivity and on-demand workforces. I wrote about this last year in my blog https://www.cognology.com.au/what-skills-will-be-most-in-demand-in-2025

We are seeing the dawning of a new age of organisational agility and innovation. Employers and skilled workers alike have much to gain from embracing new ways of working. But it will take a willingness to change and adapt.

With my last blog “Warren Buffett – Not your average billionaire”, I kicked off a series of posts we are dedicating to some of the most successful leaders of our time.

There has been a lot of media coverage lately regarding the imminent launch of an Australian branch of Amazon.com – the world’s biggest online retailer. Not surprisingly, the talk of them setting up shop here has sent local retailers into a spin.

Given its power to disrupt markets and change the way the world shops, I thought it would be timely to take a look at the founder, Chairman and CEO of this tech giant – Jeff Bezos.

Worth an estimated $72.7 billion, Bezos is painted by biographers as part dreamer, part quantitative analyst. As a teenager he imagined himself becoming an astronaut but instead went on to major in computer science at Princeton, before putting his skills to use on Wall Street. In 1994, despite having a successful career and a six-figure salary, he left Wall Street behind to create Amazon.com, a start-up retail business in the emerging and largely uncharted world wide web.

Jeff Bezos quickly proved himself a ‘wunderkind’ with great instincts. He survived the dot.com bust of the late 1990’s and continued building Amazon on the back of his own ingenuity, self confidence, and propensity to think big. 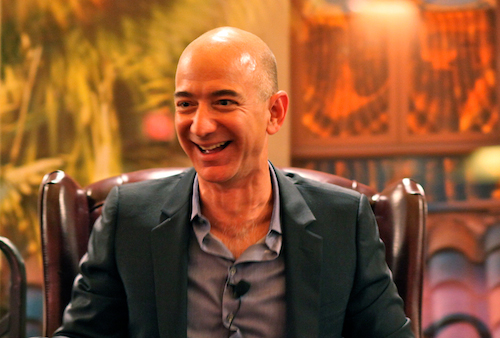 As he transitioned from a start-up boss into a leader of tens of thousands of people working across multiple businesses, Bezos became renowned for demanding nothing short of excellence from everyone around him. His expectations are captured in Amazon’s 14 Leadership Principles, and it is said that those who do best at Amazon are those who have internalised these principles and think like Jeff. And when they don’t meet his exacting standards, Bezos doesn’t mince words. For your horror (or amusement) I have included some examples of brutal one-liners that have been attributed to him

Survival of the fittest

Under Bezos’s direction, Amazon is reported to ‘manage out’ a certain percentage of its work force annually, with leaders required to rank staff and dismiss the least effective performers. [1]

Bezos has been accused by critics of lacking empathy and treating workers as expendable resources, but he has also never hidden the fact his priority is and always has been to create value for the customer.

Cohesion – the enemy of innovation?

A questioning and analytical atmosphere is characteristic of Amazon’s culture. Bezos expects his leaders to openly disagree and argue their perspectives, regardless of how uncomfortable it may make them may feel. [1] To this end, Amazon were early adaptors of an agile feedback system they call the “Anytime Feedback Tool” that enables staff to receive real time input from colleagues who have something to say about their work.

At Cognology we know from our own research that team sizes are expanding and companies are striving to find ways to facilitate greater connection, collaboration and sharing of ideas. In this respect, Amazon seems like a bit of an anomaly. Bezos is famous for his two pizza rule: no team should be larger than can be fed with two large pizzas. Bezos believes that smaller teams guard against groupthink and promote innovation. He has also suggested that cross-team communication can be disastrous for innovation as agreement between teams can limit the creative tension required for new ideas. [2]

Keeping his fingers on the pulse

Sharing his time across various ventures, Bezos cannot physically be present for every key decision Amazon makes. Being a number cruncher at heart, he puts his faith in the company’s enormous data resources and analytics, and expects leaders to use metrics to make almost every important decision.

But Bezos doesn’t just rely on cold hard data. The entrepreneur is also said to regularly scan random customer emails for feedback and complaints. And when an email is forwarded to a leader accompanied by a simple “?” from Jeff, the recipient knows to act. [3]

The heart of a Warrior

Adventure and discovery appear to be in Jeff Bezos’s very DNA. However, his passion for progress goes far beyond selfish interests or the financial benefit of shareholders. Bezos seems driven by a self-imposed higher calling to advance the welfare and development of the whole human race. His vision for the future has compelled him to commit hundreds of millions of dollars to a number of ambitious yet noble ventures like carbonless energy, advancements in neuroscience, and Blue Origin – an enterprise aimed at making space travel accessible to millions of people so that they may one day live and work in space.

Leadership involves choices. Jeff Bezos understands that to be truly great, you must be prepared to make choices that are neither popular nor easy. Without apology Jeff challenges his people to use their gifts, follow their convictions, and walk the path less travelled.

It is perhaps unfortunate that we get many of our insights into business leaders through the media, who (let’s face it) have a tendency to emphasise the sensational aspects of a story. Bezos has certainly received his share of bad press in recent years and if you believe the anecdotes of former staff who claim bad experiences, Amazon is a tough place to work. But given Bezos’s accomplishments and endeavours I can’t help but wonder how balanced the narrative has been.

I watch with interest for if and when Amazon.com comes to our shores.